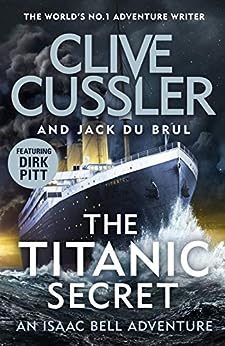 ENTER THE LATEST ISAAC BELL ADVENTURE AS HE IS JOINED WITH DIRK PITT OVER A CENTURY APART TO DISCOVER A TRUTH LOST WITH THE TITANIC . . .

When Dirk Pitt raised the Titanic in search of a rare and valuable element, he never learned the disturbing true story of its origins.

But upon receiving secret testimony from private detective Isaac Bell, he's taken back to the year 1911 and a tragedy at Colorado's Little Angel Mine.

There, Isaac Bell is tasked with explaining the deaths of nine miners. But all is not as it seems and soon Bell finds himself on his way to Europe hunting for clues concerning a rare element of incalculable value.

All while being pursued by dangerous men.

Men who will do anything to get their hands on it . . .

Isaac Bell must decide how far he'll go to stop them, it's a journey that can only end with the fateful first and final voyage of the Titanic itself.

'Just about the best in the business' New York Post

'Nobody does it better . . . nobody!' Stephen Coonts