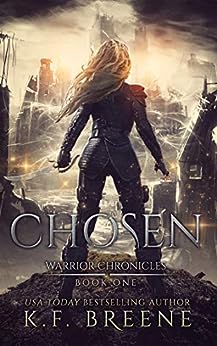 This series is what K.F. Breene does best – strong heroine, incredible hero, and a community of underdogs that never say die! Binge this completed series!

"What an incredible action packed adventure!" ★★★★★

"If you like a strong female, great plot, awesome characters, sexy alpha male who is gonna be more complex than you first thought…and a great villain. Then READ THIS SERIES. ★★★★★

It is said that when war threatens the world, one individual will be selected by prophecy to lead the Shadow Warriors out of the Land of Mist and reclaim the freedom which has been stolen.
~~
Shanti has grown up under the constant threat of war. Since she helped her people defeat a raiding party by using a special power, she’s been a hunted woman. Carrying rare abilities and an uncanny fighting aptitude, Shanti is the only hope of salvation for her people. The problem is, she doesn’t believe in her own divinity, and when she flounders, she nearly fails in the duty hanging so heavy on her shoulders.

It seems like any other day when Sanders and his band of misfit boys find a foreign woman clinging to life in the wastelands. Oblivious to the weapon they now have in their possession, they are content to harbor the mysterious woman until she is well enough to continue her journey.

But when the war spreads its arms and lands on her borrowed doorstep, Shanti has no choice but to reveal her secrets, plunging her saviors into danger. If they band with her, they will face certain death. But to trade her to Xandre, the warlord desperate to add her to his war machine, would be to give up their entire way of life.

War is coming. The only choice becomes: Which side do you choose?