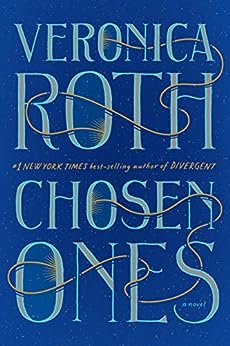 The masterful first novel for adults from the mega-selling author of the Divergent franchise.

"A stunning thriller/fantasy/sci-fi chimera like nothing I've read before." –Blake Crouch

"A hugely imagined, twisty, turning tale that leads through the labyrinths of magic and war to the center of the heart." –Diana Gabaldon

Fifteen years ago, five ordinary teenagers were singled out by a prophecy to take down an impossibly powerful entity wreaking havoc across North America. He was known as the Dark One, and his weapon of choice—catastrophic events known as Drains—leveled cities and claimed thousands of lives. Chosen Ones, as the teens were known, gave everything they had to defeat him.

After the Dark One fell, the world went back to normal . . . for everyone but them. After all, what do you do when you’re the most famous people on Earth, your only education was in magical destruction, and your purpose in life is now fulfilled?

Of the five, Sloane has had the hardest time adjusting. Everyone else blames the PTSD—and her huge attitude problem—but really, she’s hiding secrets from them . . . secrets that keep her tied to the past and alienate her from the only four people in the world who understand her.

On the tenth anniversary of the Dark One’s defeat, something unthinkable happens: one of the Chosen Ones dies. When the others gather for the funeral, they discover the Dark One’s ultimate goal was much bigger than they, the government, or even prophecy could have foretold—bigger than the world itself.

And this time, fighting back might take more than Sloane has to give.

A Conversation with Veronica Roth

CHOSEN ONES is your first novel for adults, after you’ve had so many successful books in the YA space. Why did you want to write for a different audience? And how was it different?

At first, I really don’t consider audience. I think about the idea, the characters, and the plot, and then after I’ve figured those things out, I consider who the story is for. And that’s what separates a YA book from an adult book—who it’s for. So my approach to the book didn’t really change: I set out to write the best book I could, considering my characters’ psychology carefully, the same way I always do.

The biggest difference, then, was at the development stage, not the writing stage: I built a story that was fundamentally about adulthood. CHOSEN ONES isn’t about coming of age; it’s about maturing, taking responsibility for your place in the world, and realizing that pain doesn’t give you license to be a jerk.

It’s about learning that the battles you fought to get where you are aren’t over—they’re never over, but you get to fight them differently the next time around.

Your book follows five people who, as teenagers, saved the world. What made you interested in exploring this time in their lives?

CHOSEN ONES started with something I get asked a lot: if the Divergent series hadn’t ended the way it did (no spoilers), would the characters have gotten married and had babies and lived happily ever after? That’s not a question I can answer—for me, the ending of the series is the only ending—but the idea of a teenage chosen one’s “after” did stick with me.

The thing is, the significant “chosen one” stories of my formative years actually do explore what comes after. You can read about an adult Paul Atreides, Ender Wiggin, or even Harry Potter, but the focus of those continuations isn’t on the psychological impact of their childhood trauma in the immediate aftermath, because that wasn’t the primary concern of those authors. So while I don’t expect those books to be about how someone would cope with being famous for hurting someone (or many someones), I still had the question. And an unanswered question is the best foundation for writing.

What kind of research did you do for this book?

I had to learn a lot about history, particularly Chicago history. It’s hard to talk about without spoiling anything, but in CHOSEN ONES I developed an alternate history, diverging from our own in 1969. The tricky thing is, if you’re going to build an alternate history, you have to know a lot about the original one, so you know what you’re changing and why. My major areas of focus were the history of modern computing, the Space Race, the development of SONAR, and Chicago architecture, both its history and the design features of particular architectural movements. I also know what an “escutcheon” is, and how to break into a couple different types of locked door.

My formative “chosen ones” stories were Dune, Lord of the Rings, Ender’s Game, and Harry Potter. The incredible arrogance of Paul Atreides swallowing poison to become the Kwisatz Haderach, or the horrible moment when Harry finally hears the prophecy that winnows his future down to a single purpose—those moments are burned in my brain. Maybe it’s because I come from a highly individualistic culture, but there’s something so fascinating to me about a character singled out by destiny (or whatever) for a significant—and often terrible—purpose. The burden of it. The isolation. The mettle it takes to rise to the occasion. I love every part of it. And I have so many questions about it, too, particularly about what happens when we offload our responsibilities to select individuals—what happens to them? What happens to us? Do we want to believe in Chosen Ones who will fight our toughest battles for us, or do we want to become them ourselves? I don’t know. Maybe both can be true.

The other narrative I should mention is the one I wrote—Divergent is a Chosen One story. The main character, Tris, is singled out by her unique brain, but she also takes up the mantle by choice—and that interplay between fate and choice is a huge feature of Chosen One stories. In some ways, Divergent and CHOSEN ONES are a call and response. Tris is the idealistic young person who fights the battle; Sloane is the jaded adult who deals with the emotional and psychological aftermath. Their stories (and personalities) are quite different, but thematically, for me, they’re linked. I’m not sure I would have written CHOSEN ONES without first writing Divergent.

Your book is full of action, sometimes dark, but it can also be quite funny. Do you find it difficult to write humor? Why is it so important for this book?

There are a few things I’ve been actively working on in my writing since my first book, and humor is one of them. Humor is hard. I have tremendous respect for anyone who writes comedy. How do you think about comic timing in a work of writing, when people read at their own speed, when they can stop and start again at any time? How do you align what a reader finds funny with what you find funny with what your character finds funny? It’s not easy.

The reason it’s a priority for me is that humor is a big part of being human. It’s how we cope with the world, how we point out the world’s absurdities and injustices, how we form connections with people. On a craft level, too, I think that if you can give your book higher peaks, you can also give it deeper valleys. Humor is a powerful tool for a writer, and I want as many tools as I can possibly cram into this writing toolbox.

Beyond all that, though, it’s pretty simple: the older I get, the more I need to laugh.